When a small mass in a hand-held device oscillates along a single axis with asymmetric acceleration (strongly peaked in one direction and diffuse in the other), the holder typically experiences a kinesthetic illusion characterized by the sensation of being continuously pushed or pulled by the device. This effect was investigated because of its potential application to a hand-held, non-grounded, haptic device that can convey a sense of a continuous translational force in one direction, which is a key missing piece in haptic research.

Buru-Navi generates a force sensation by exploiting human perception characteristics. No directional force would be felt if the mass were merely moved back and forth, so we use different acceleration patterns for the two directions to create a perceived force imbalance that produces the sensation of directional pushing or pulling. Since the weaker acceleration is not detected by the internal human haptic sensors, the original position of the mass is washed away. The user is tricked into perceiving a uni-directional force, which can be made continuous by repeating the motions.

Mechanism to create an asymmetric oscillation

We constructed a one-degree-of-freedom haptic device based on a crank-slider mechanism. The device converts the constant rotation of an electric motor into the constrained movement of a small mass with asymmetric acceleration. The developed mechanism imparts a feeling of force through the back-and-forth motion of a small, constrained mass. 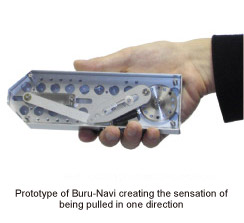 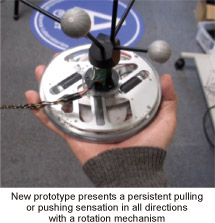 In mobile devices, haptic stimuli are limited to cutaneous ones (tactile ones), such as vibrations generated from vibrators. This is because mobile devices have difficulty producing a kinesthetic sensation, not to mention that applying low-frequency forces to users requires a fixed mechanical ground, which mobile haptic devices lack. In addition, torque feedback devices, which are found on conventional displays, can generate only a transient rotational force sensation. We proposed a force perception method that can generate a sustained directional force sensation with no external grounding and showed that most people who have experienced the force sensation created by asymmetric acceleration can clearly perceive a pulled or pushed sensation.

Wayfinder for the visually-impaired

We performed an experiment related to predefined route guidance using the force display with volunteers from the Kyoto Prefectural School for the Visually-Impaired. In our experiment, the haptic direction indicator allowed people with visual impairments to walk safely along a predefined route at their usual walking pace without any previous training, independent of auditory information.

Not only for the visually-impaired but also for those who use mobile phones, our proposed method, if complemented with a location and orientation-aware mobile device (e.g., GPS function), could be used in systems that guide users to destinations without forcing them to look at a screen.