The use of strong fluctuations in devices poses new possibilities of communication technology. We are exploring the possibilities by applying new methods from the fields of nonlinear dynamics and information theory to problems of signal transmission and generation in strongly fluctuating devices. In particular, we are developing a secure key sharing scheme and a fast and compact physical random number generator, based on strongly fluctuating phenomena in optical devices.

Research strategy. We aim to develop new methods for signal transmission and generation which exploit randomly fluctuating phenomena. One promising application is secure key sharing using correlated randomness. Secure key sharing technology enables two users to share common secret information even if no secret information is available for them in advance. To this goal, we have proposed the use of randomly fluctuating phenomena in optical devices to generate correlated randomness. The proposed secure key sharing scheme in principle can achieve a high security level. Another promising application area is random number generation for data security. We have developed a compact optical device which can generate absolutely unpredictable random numbers much faster than existing technologies. These applications are expected to become key technologies in future communication networks. 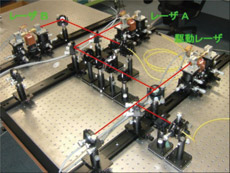 Absolutely unpredictable random number sequences are essential for data security. For example, they are used for encryption, password generation, and the segmentation processing of secret data in secret sharing schemes. So there is a demand for a compact device that rapidly generates unpredictable random numbers on the basis of a physical phenomenon. We are developing a random signal generator module, based on the phenomenon in which the intensity of light from a semiconductor laser varies randomly over time at high speed. We are using the most
advanced integrated optical circuit technology and high-frequency packaging technology to achieve a fast and compact random signal generator module. Digitizing the random output signal of the module can produce an unpredictable sequence of random numbers at high speed. The current module has achieved random number generation at 2.08 Gbit/s.