Visual information is acquired to perceive the external world. We then decide how to move our limbs in three-dimensional space (Fig. A). We usually believe we can fully control our own actions, but actually this is not true. One typical example is a quick arm response without any intention that is caused by observing a sudden visual motion during an arm reaching movement; we call this the Manual Following Response (MFR). MFR is elicited with ultra-short latency, which is deemed to be driven by a direct pathway from visual motion processing to motor control, bypassing the processing for perception and action decision-making (Fig. B). Since the brain has many automatic sensorimotor control mechanisms for regulating behavior, we need to reveal the reflexive information processing to understand rich interactions with natural and dynamic environments. 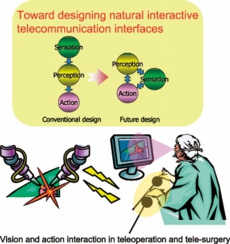 Since such conventional telecommunication interfaces as TV-phone and TV-conferences were only designed for auditory and visual perceptions, these interface designs do not satisfy the requirements for implicit brain functions for action. For designing sophisticated interactive interfaces, we need to know how we use visual/auditory information not only for perception but also for action. Our studies will provide fundamental ideas and prerequisites for future natural interactive interface design. 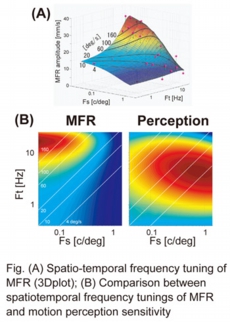 How does the brain analyze visual motion for generating quick motor response? We have investigated the specificities of visual motion analysis for MFR: image contrast and spatiotemporal frequency tunings. We found that the MFR amplitude (characterized by its velocity response) sharply increased with image contrast under 10% and almost leveled off thereafter. In addition, regardless of the spatial frequency, the MFR amplitude increased almost proportionally to the logarithm of the stimulus speed until the temporal frequency reached 15-20 Hz and then fell off (Fig. A). Interestingly, the spatiotemporal tuning of the MFR was clearly different
from that of the perceptual sensitivity for visual motion (Fig. B), suggesting a computation dissociation between perception and action even for identical visual motions. 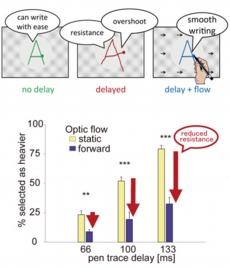 Delayed visual feedback induces a resistive or sluggish sensation during manual movements. This stressful sensation deteriorates the quality of interactive network services.
We have invented a new method to improve the subjective feeling and movement performance of delayed system operation by activating the implicit brain function for the MFR generation. By applying a selected background visual motion, sluggish sensation and overshoots, which were induced by delayed visual feedback, were reduced successfully.